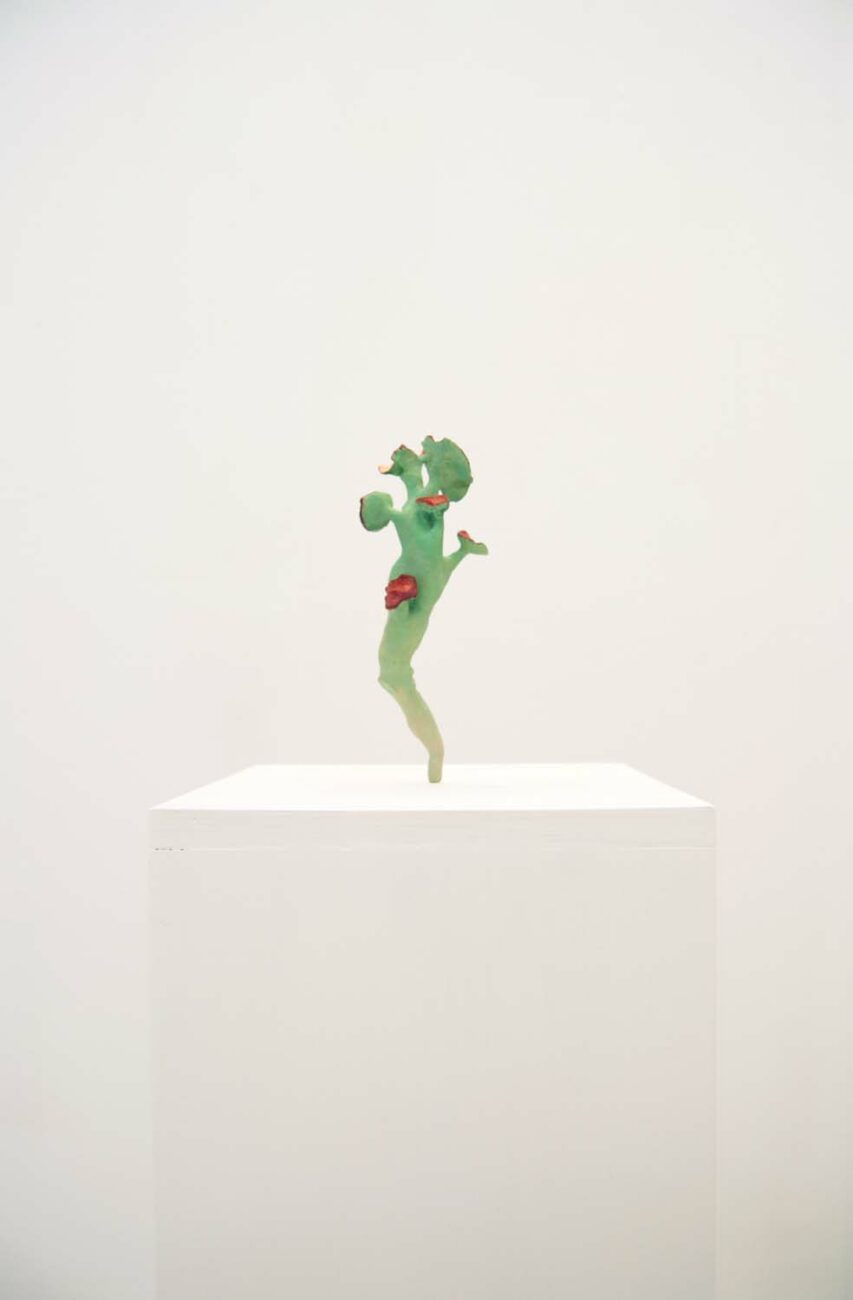 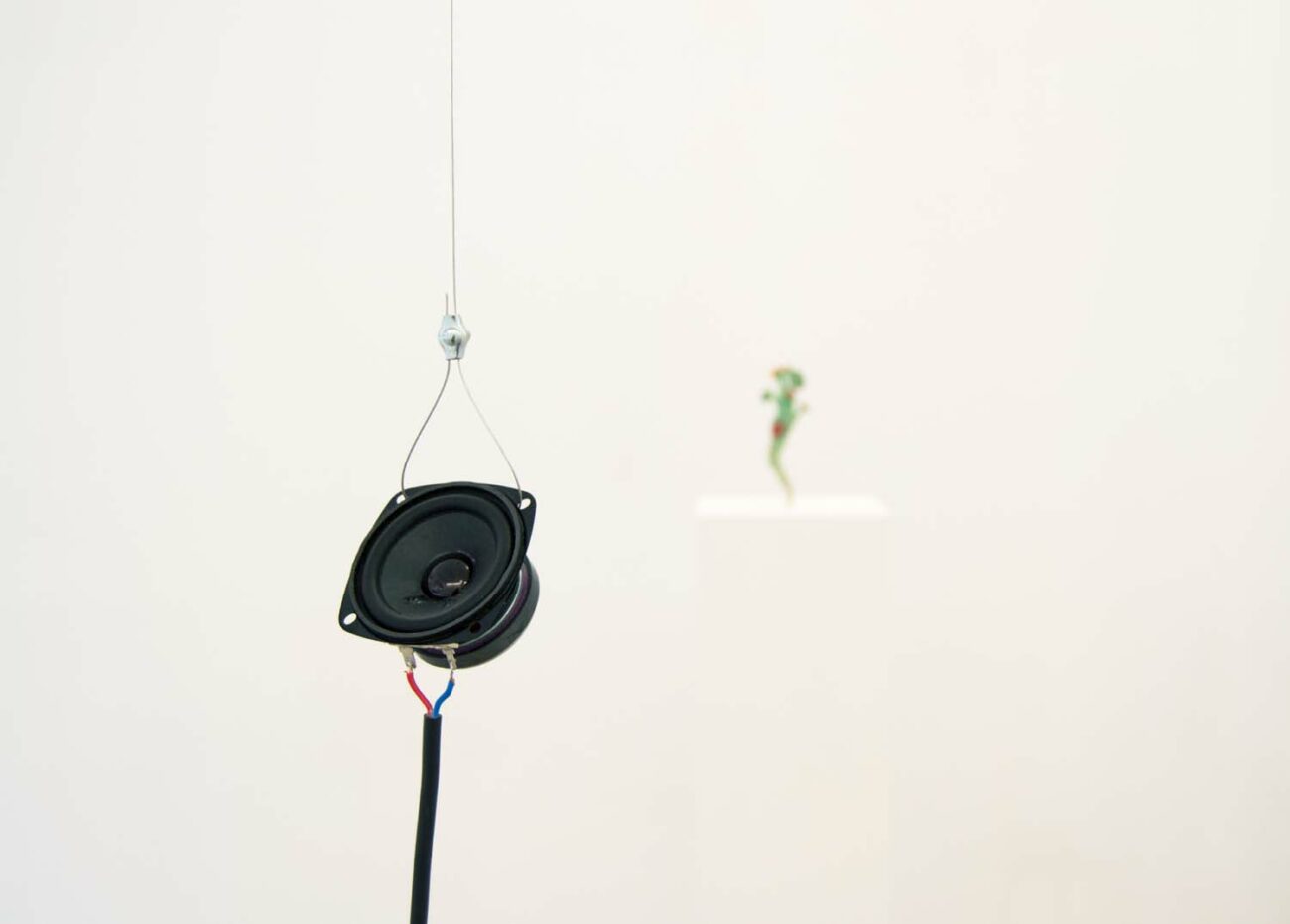 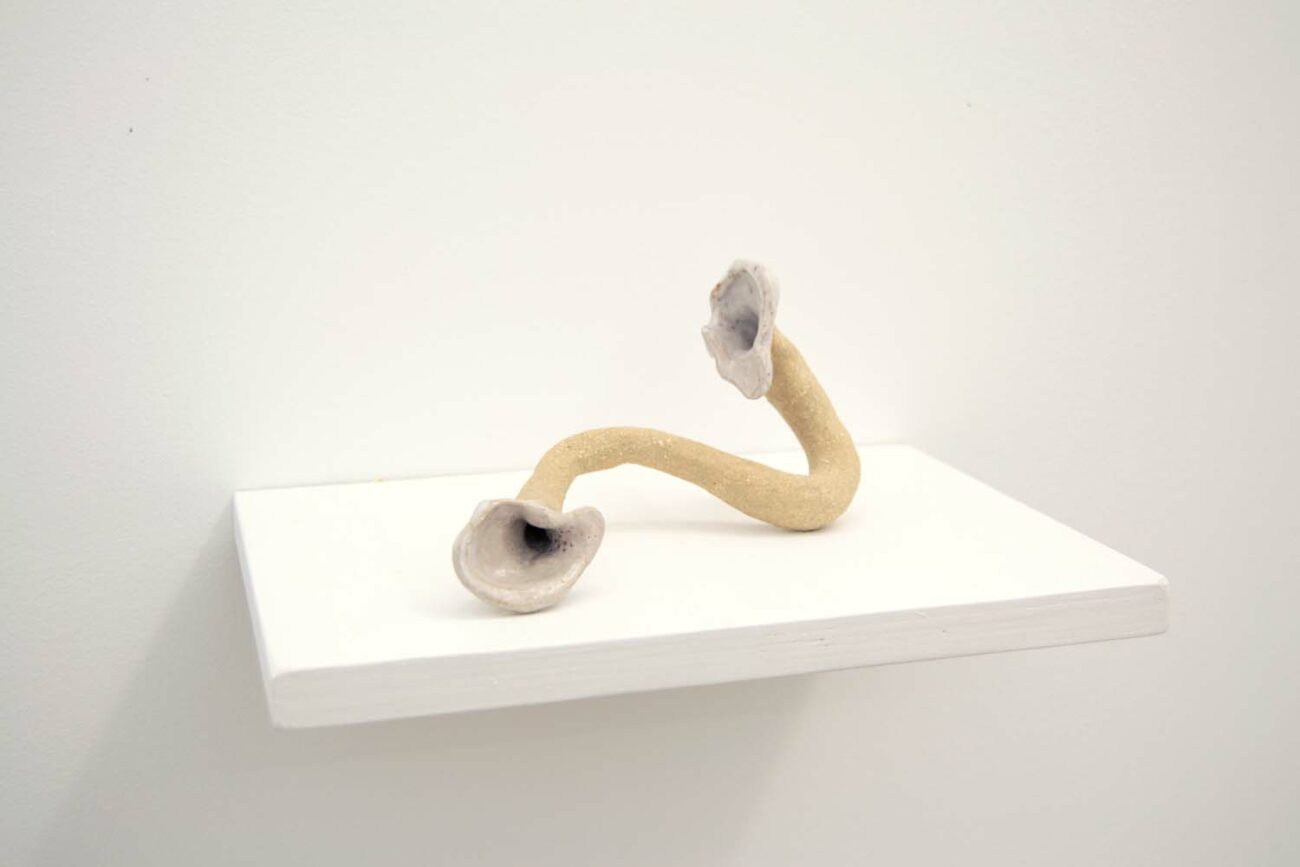 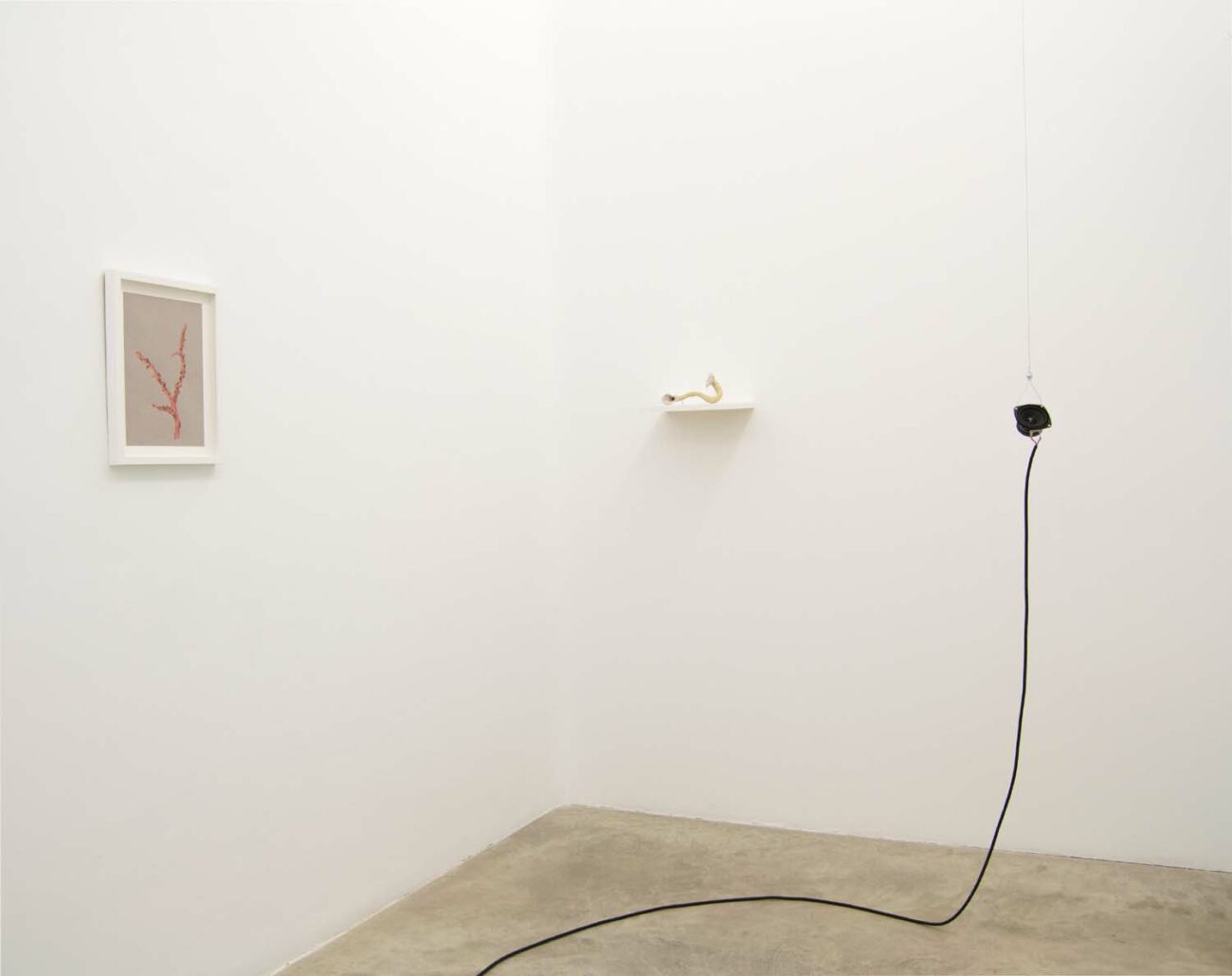 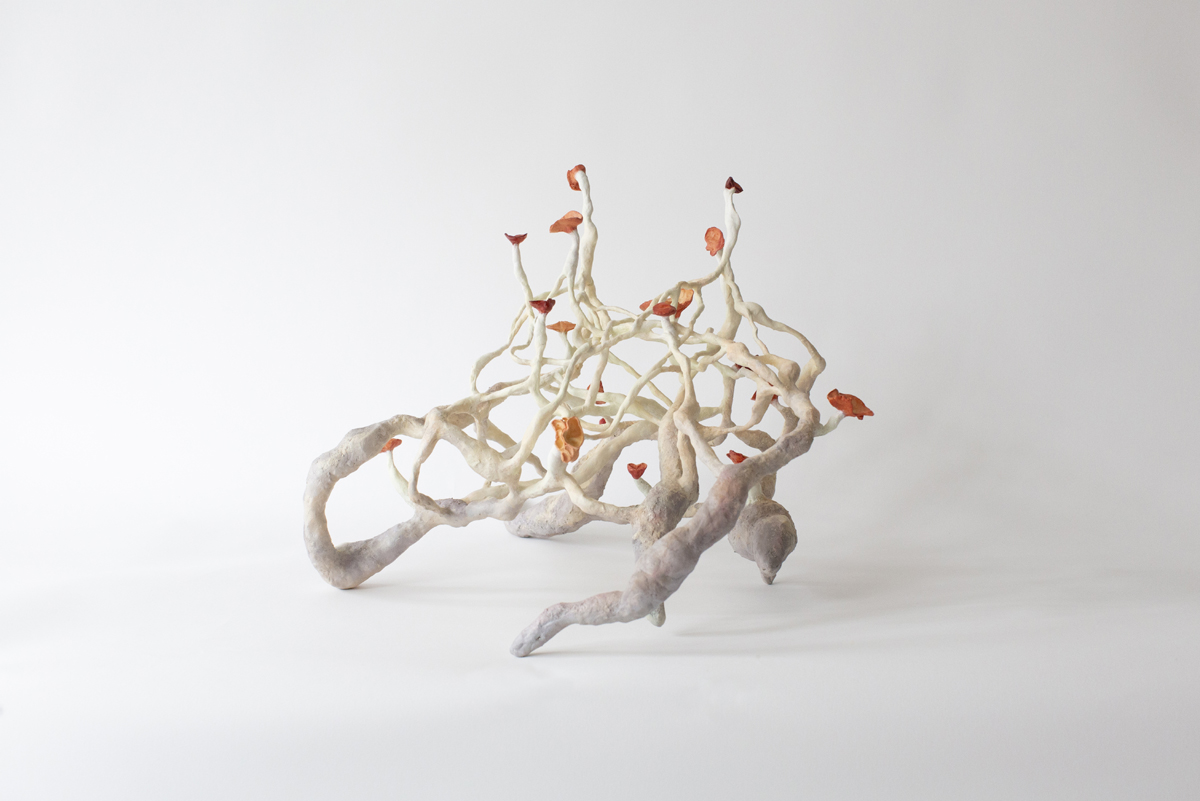 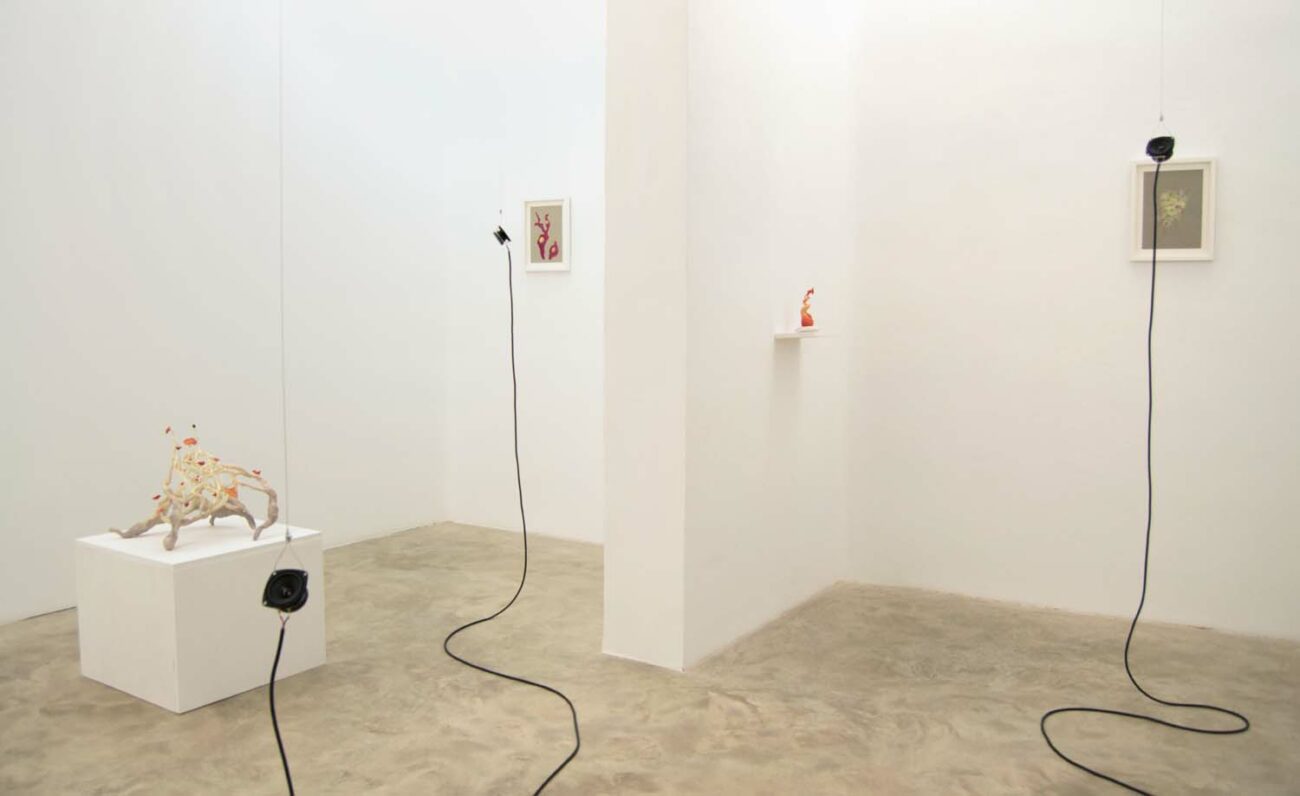 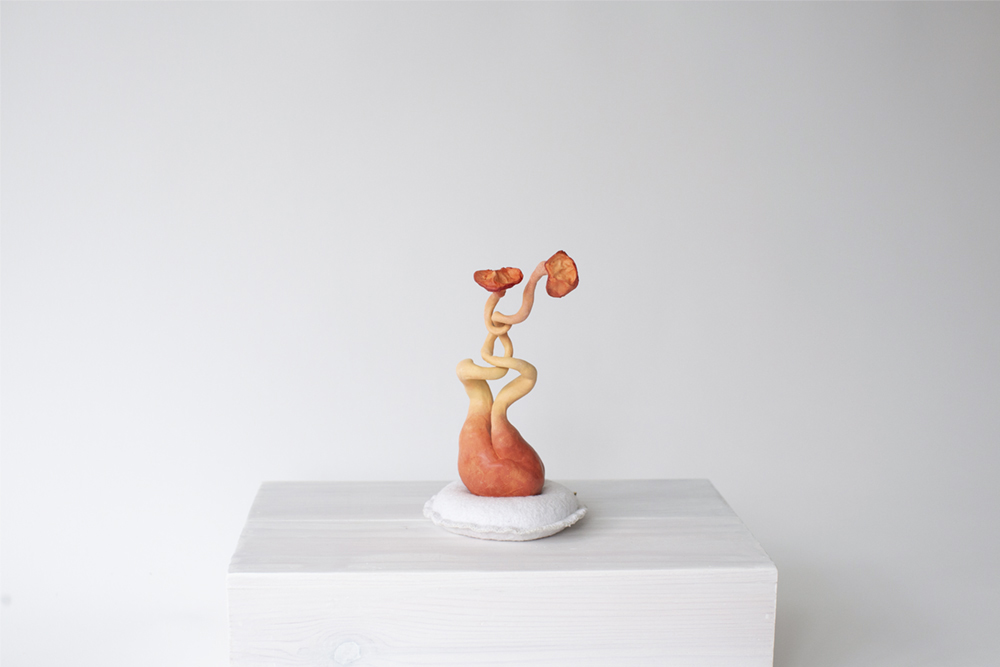 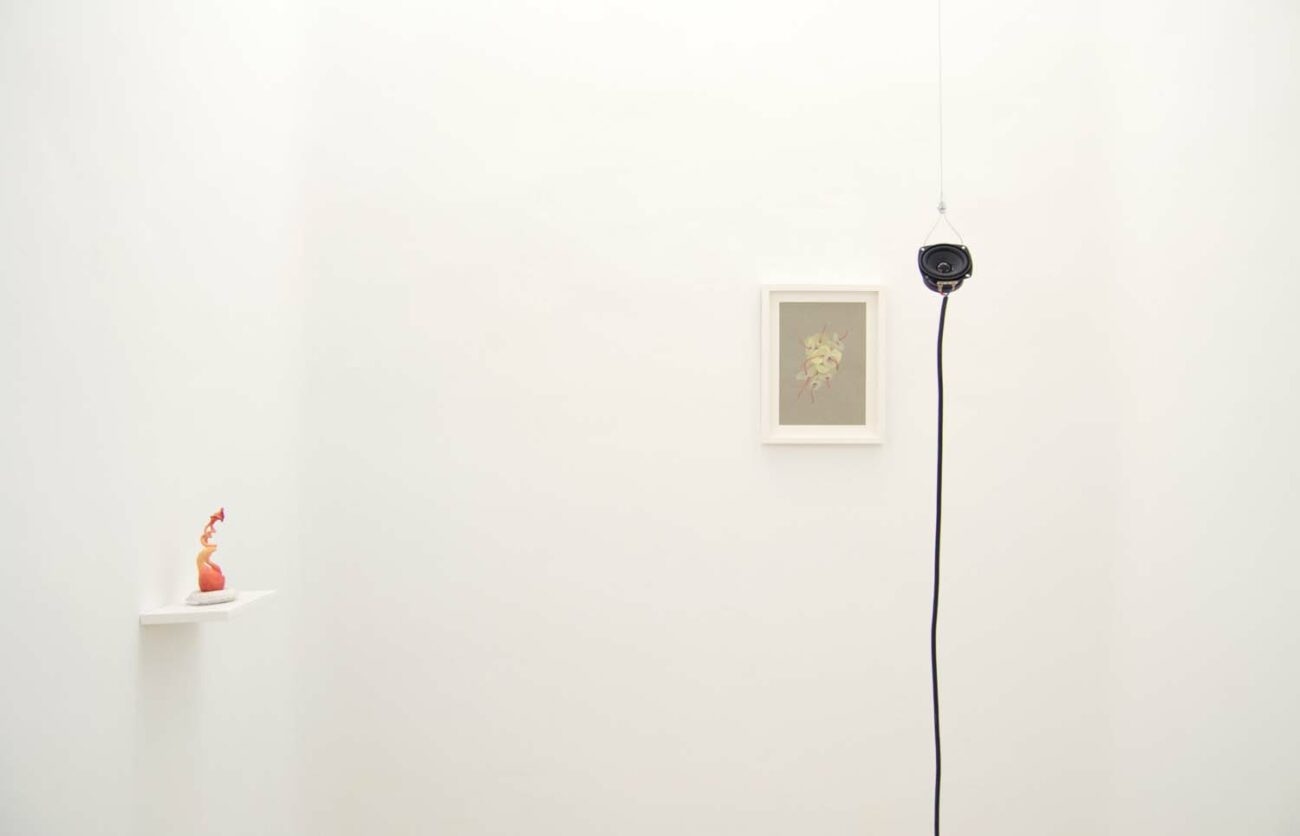 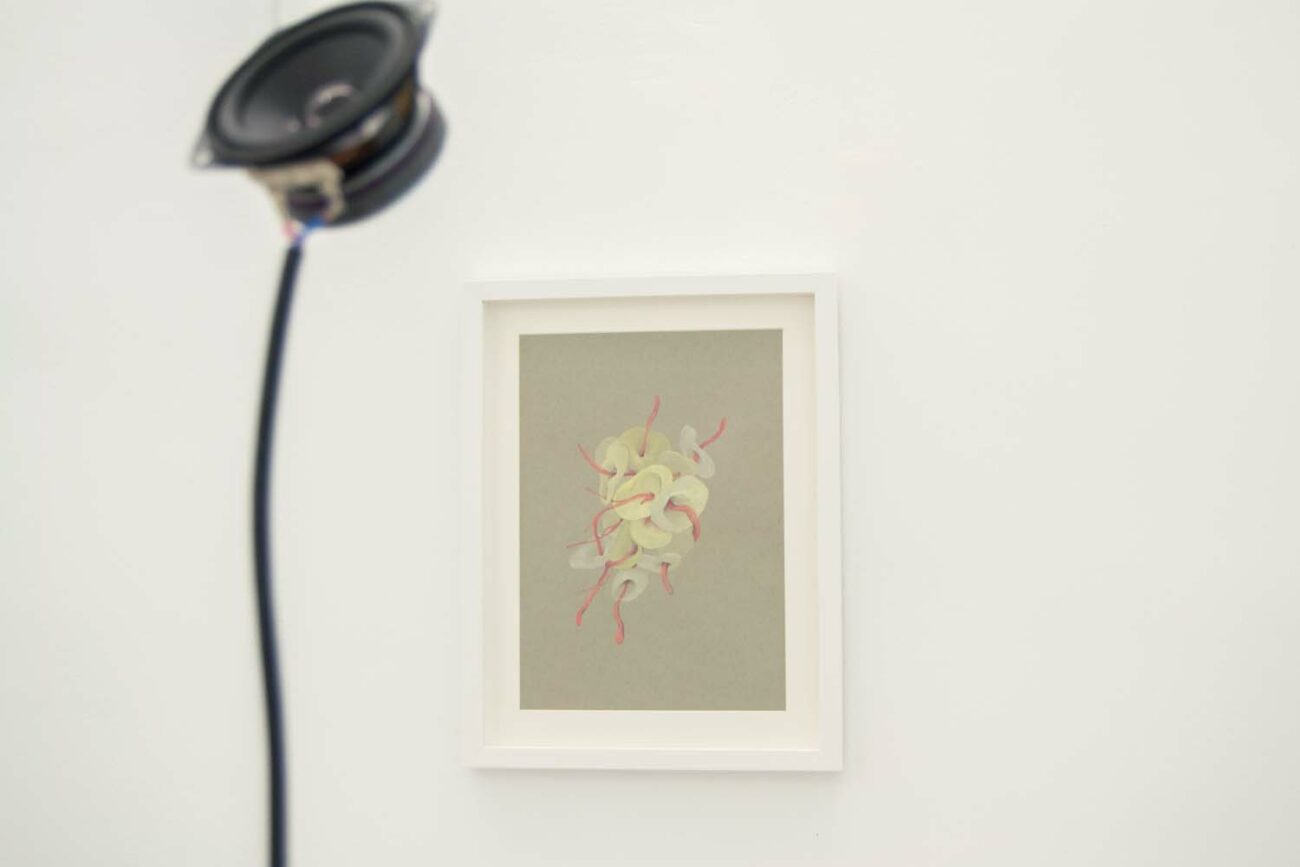 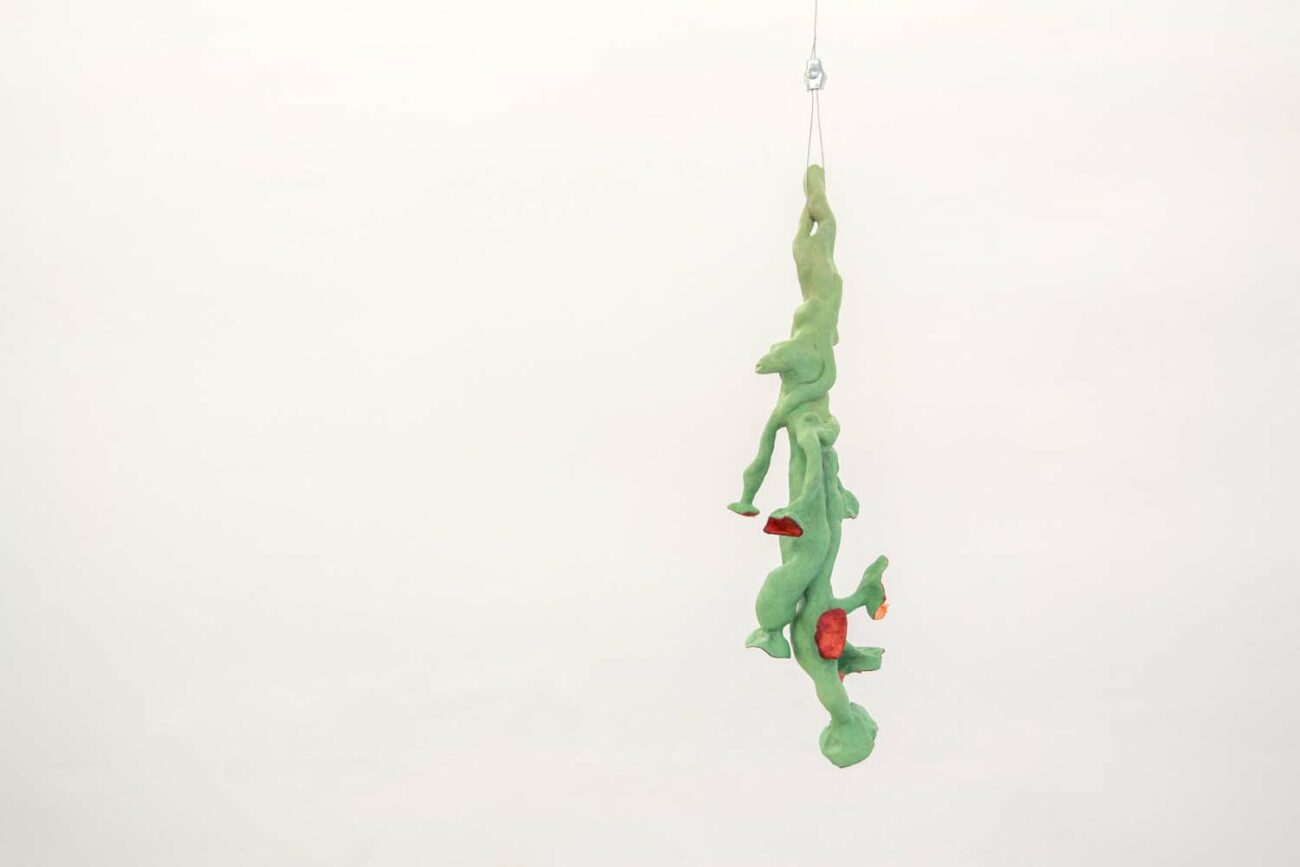 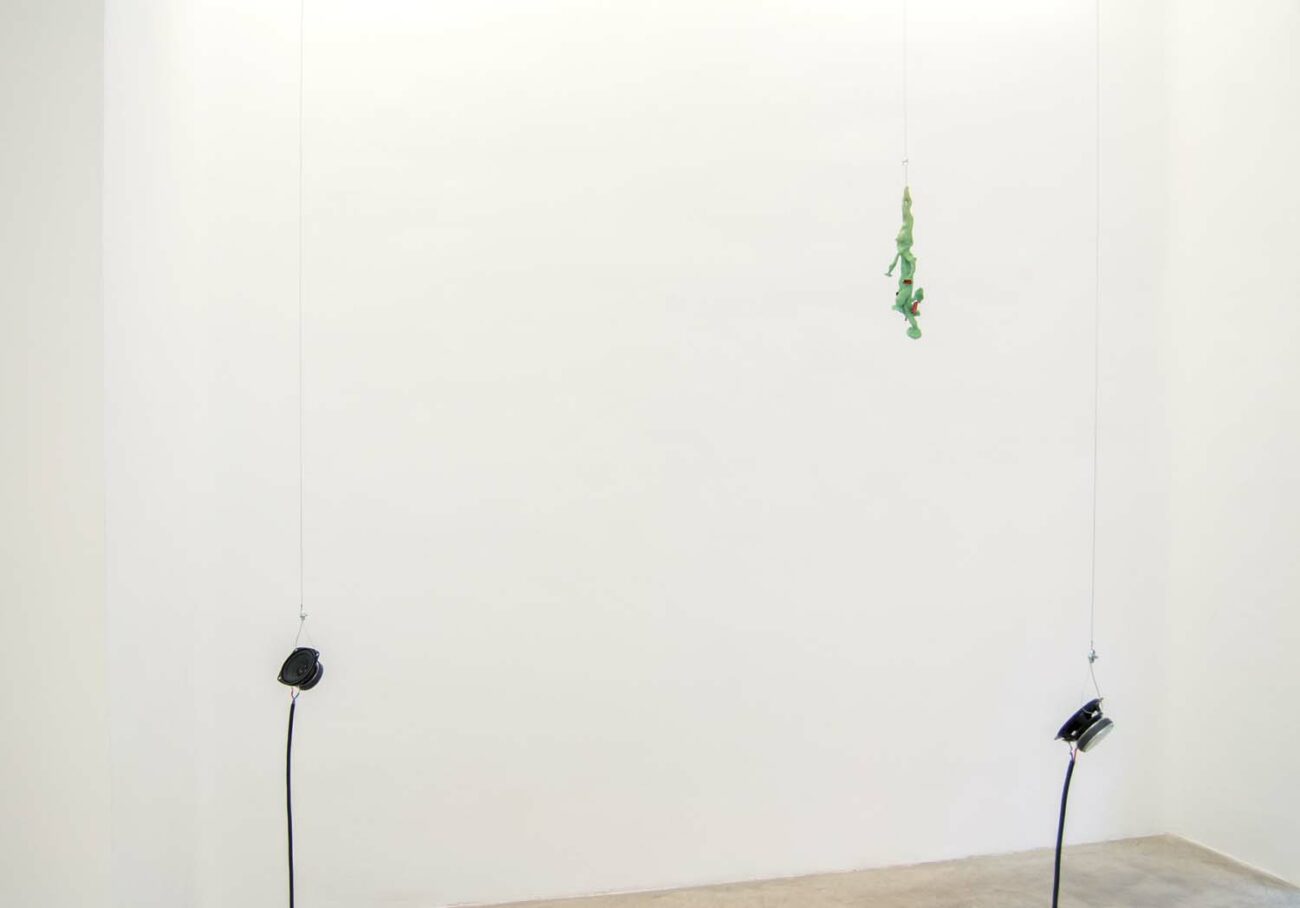 “Her ear is a single link to a whole world of buried activity; it’s like a mushroom, a brief pale signal thrust from  under the ground to show that a large network of interconnected threads is alive and flourishing down there.”1

Making on a domestic scale, on top of her daughter’s baby clothes, is Rebecca Glover’s space, weaving time in between baby’s schedules, baby’s noises, baby’s developments, the baby is as close to the work as possible.  An environment that was once contained, potent, inside and of the body is now externalised; The edge of  what I wasn’t I was.

Feeling inside out Glover operates within a soup of stuff, now bound to another being like lichen. The need to  be as close and intimate as possible transcends appropriate boundaries, as tiny baby fingers find her mouth  whilst she sleeps in order to close the loop, complete their energetic environmental circuit, which now has to  operate across space. A negotiation, whilst asleep, a co-operation of trust plugging the gap between them so  that they cross over internal external boundary – hand in mouth – is a completeness.

“Pregnancy was the first time I experienced the body as an environment and of my body being a host and  there being some sort of parasitic element.”2

Take over; The edge of what I wasn’t I was.

Listening through touch when pregnant is a way to try to get to know this new thing, the inside form and the  inside self, listening as a way to find and focus each other.

Our ear bones are descended from reptiles and snakes use their jaw bones to hear, feeling the vibration of  sound in their mouths. Olfactory listening.

Breast feeding, staring at her ear, tumbling into it, a never-ending spiral, boring into this creature, but she, also  listening and spinning Glover out again so that their WE were listening in the same space, together, listening in a multiple way as the same shared body. Listening as a fine-tuning dialogue, like strings warming up, violins, playing the same string from different instruments and resonating off all the different A’s to eventually meld  into a solid harmonious note.

In this soupy element of sound things can meld, drone, hum and overlap like two rocks rubbed on each other’s roundness or waves passing over one another like folding wings.

Picking sculptures up one by one and showing me on zoom, works in process, the first is the casts of wood ear mushrooms, that grow out of hardwood. Called “Polyphony”, it is a multiple body, all networked together in  the same mass. A textured polyphony of listening, their form reverses the opening of singing into clefts to  hear, bringing their cavity forward and upward. Substituting a head, silencing it as there is no mouth, these are  a network of ears.

One hangs upside down, awkward ear creature the colour of pink earth lichen.

Made of polymer clay, a “method for my circumstances,” their moldable properties are worn visibly.

A little one sits on an old breast pad, a cushion, the underpainting becoming the finish, as if the interior  materially stands for itself too.

Formed from casts of wood ear mushrooms, they look organic and beautiful, creepy and alien, as if from a sci  fi landscape, their colours selected from a Lichen book of colour. Wood Ear mushrooms are small to medium in  size, curved and wavy with an ear-like shape. The fruiting bodies are brown to dark brown with a slippery or  gelatinous texture and can be made up of smooth, puckered edges or many folds and wrinkles with some  veining.

Impression is important. A vibrating body hears through the vibrations of other things, their resonance. Patrick  Farmer’s research3 shows earthworms bodies receive vibrations and when certain frequencies are played it  forces them to burrow or to come to the surface. Foley4 always thinks about the resonance of objects and how  they affect one another, how they leave an impression on each other.

Glover delights, rubbing two rocks together, very smooth beautiful rocks, on a wooden chest. She speaks  about their insides, going inside the rocks, about how the sound makes you aware of the fullness of their  bodies. The idea of amplification and the resonance of the wood, hearing the cavity of the wood, like the  inside of the ear. It is thought, that there is a bracket fungus that enables humans to stay under water for long periods.

Glover’s paintings, made whilst pregnant, try to understand the forms and feelings inside the pregnant  environment, bearing witness to being a body inside a body, the fundamental weirdness of the design of the  human form, the hull as shared territory. Troubling the idea of pregnancy, the intimate sketches become drawing notes, a sort of listening annotation, in gouache and watercolour. One is called the Rock Eater, an  Azores Lichen, that breaks down volcanic rock. Lichen is a combination of two or more organisms, that  changes material form and disambiguates the individual. The forms are obviously ears but also mouths, ear  mouths, like a fruiting body, visually as well as actually challenging the idea of a singular identity.

The caterpillar in Alice and Wonderland offers Alice;

“One side of what?” asks Alice.

Angrily the caterpillar shouts “The mushroom of course!”5

The caterpillar represents significant moments of change for Alice in the story. The maze concept, proposed  by Merlin Sheldrake, suggests that fungi can pass through two doors at once.

“Fungi are so indeterminate. You can’t say what shape mycelium is unless you know where it’s growing. It  pours itself into its environment. If we want to get a feeling for mycelium we might have to get in touch with  the most indeterminate parts of ourselves, our minds.”6

Musical polyphony is a way to feel this reliably in feeling and thought. Polyphony is singing more than one part  or telling more than one story at a time. Found in choral music such as Thomas Tallis and in the traditions of  the Acca people, in this soundscape multiple voices intermingle without seeming to be many, they fuse and  depart from each other. The idea of a multitude leans into the ears relaxing them, hearing all of those parts

coalesce into a single piece of music, parts giving rise to the whole. Polyphony in human form is to branch, to  synthesize, to decide to intertwine without ceasing to be many – a very special polyphony.

Breaking down the boundaries – past, present; human, non-human; you, me – the hums of the baby, like  jewelry moving underwater, cross over to The edge of what I wasn’t I was.

4 Foley – In filmmaking, Foley is the reproduction of everyday sound effects that are added to films, videos, and other media in post production to enhance audio quality. Rebecca Glover is a Foley artist.